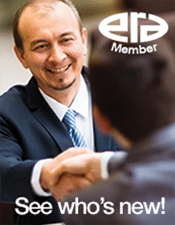 From ERA’s Chicago headquarters flow the programs, publications and member benefits that respond to members’ multifaceted needs. A dedicated volunteer corps guides and oversees the operation of an outstanding professional staff, to respond to members’ multiple roles as managers, entrepreneurs, salespeople and employers while enhancing the manufacturers’ representative function.

Since 1935, ERA’s assertive leadership role in promoting and protecting the function has led to the identification of manufacturers’ representatives as equal partners in the field sales and marketing process. ERA gives a voice not only to representatives but to the manufacturers and distributors who partner with them. ERA listens and responds to members and to the forces that impact the success of their companies.

It is the mission of ERA to advance and support the professional field sales function in the global electronics industry by providing programs, services and activities that educate, inform and advocate for manufacturers’ representatives, the principals they represent and the distributors who are representatives’ partners in the marketplace.

To fulfill its mission, ERA offers a wide array of programs, services and activities, including:

Free bi-monthly Educational Teleforums for reps, manufacturers and distributors, as well as a past Teleforum library and Webinar archive

The Representor magazine, published quarterly for electronics industry reps, manufacturers and distributors, as well as the searchable Representor Article Archive.

Visit the links under the Member Resources menu for additional information.

ERA begins where selling begins – in the local territory. It is the point of entry for fellowship, networking and idea exchange among electronics representatives at events that often include distributors, manufacturers and customers. Chapter meetings and activities provide timely programs in an ideal environment for profitable interface among industry peers.  Delegates from each chapter constitute the national governing structure of ERA, carrying members’ input to the national leadership and staff.

To browse through the ERA Chapter listings, click here.

Members choose the marketing group or groups with which they want their companies identified.

A History of ERA

In October of 1935, a small group of radio parts representatives gathered in New York City to share experiences and exchange ideas and knowledge about the still-developing industry. This momentous meeting led to what has become today’s Electronics Representatives Association. The representatives, who held that first meeting in the office of D.R. “Danny” Bittan, decided to call their organization “The Peddlers.” By the following month, more than 32 representatives gathered at the Hotel Edison in New York to elect the association’s first officers: President Jack Price, Vice President Earl Dietrich and Secretary/Treasurer Dave Sonkin. At this time, the name “The Peddler’s was deemed rather unsophisticated for a group of professional salesmen, and a new name, “The Representatives of Radio Parts Manufacturers’ ” was adopted.

By 1936, membership had grown to 78, and plans were initiated to establish “chapters” or”sections” in leading cities throughout the country. During these early days, the association established its bylaws and initial objective — “To create a spirit of mutual respect, esteem and cooperation among its members and the radio and allied industries” — paving the way for the future.

Unlike many similar organizations, ERA endured throughout the years of World War II, thanks to the guidance and perseverance of its leaders, namely then-president Sam MacDonald. During the latter half of the 1940s, the office operation of the association was moved from New York to Chicago. At this time, the first staff members were hired to help the Industry Relations Committee publish directories and send mailings to industry members. And in 1948, the first Representor newsletter was published as a service to both the membership and the radio-parts industry.

The 1950s was a critical period in ERA’s development. In 1953, membership in ERA changed from an individual basis to a company basis, and in 1954, the association adopted its first official Code of Ethics. During this time, ERA officially became a professional trade association, rather than a semi-social group. Also during this decade, the first, full-time executive director was hired to manage the affairs of the national operation. In 1958, the association changed its name to the Electronics Representatives Association.

As ERA has continued to grow with progressive programs, so has its role as a functional group in the electronics industry. Many of ERA’s most successful programs serve to bring the rep to a closer working relationship with manufacturers and distributors. These programs include the expansion of the Lines Available service, the restructuring of the ERA Insurance Trust, the development of educational and industry seminar programs, the restructuring of the national offices to include product group vice presidents, and increased involvement in the participation of ERA on trade show boards.

These programs include the expansion of membership to include manufacturers and distributors, the shifting of the ERA Conference to an annual event, an enhanced Lines Available service, the offering of bi-monthly educational teleforums, a growing roster of Expert Access providers, the addition of many new member services and continuing involvement as a sponsor of the EDS Summit.

The Electronics Representatives Association was established to serve electronics representatives, manufacturers, customers and their industry and to foster interaction in a professional and productive manner. To that end, this Code of Ethics has been adopted by all ERA representative members.

Contracts:
Representatives will respect and honor the negotiated contracts of principals represented. They will refrain from deception or misrepresentation of any price or product, or concealing pertinent facts. They will give the same service to customers and principals that they expect from their own organization.

Support:
Representatives will support the efforts of their colleagues, chapters and international association to set standards for their profession through example, education and training to promote and protect the free enterprise system.

Honor:
Whereas it is acceptable and routine for manufacturers’ representatives to advertise and promote their capabilities, a representative should refrain from soliciting manufacturers with the objective of encouraging a principal to break a contractual relationship with another representative.

Respect:
A representative shall not directly or indirectly solicit the services or affiliation of an employee of another representative without proper notice to the other organization.