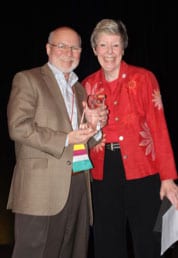 Evans was recognized for his nearly 20 years of contribution to ERA at the chapter and national levels, his long-standing commitment to education as the current chair of the Chapter Leadership Council, and his service to both the Chicagoland-Wisconsin Chapter and the ERA Executive Committee.

This award was created in 2017 to honor Tess Hill, a long-time ERA staff member. It recognizes individuals for their longevity of service to ERA, for inspiring volunteerism in its highest form and for their dedication to ERA’s educational mission.

“To say that it was humbling for me to receive an award bearing Tess Hill’s name, and one previously bestowed upon Tess and Kathie Cahill, would be a gross understatement,” Evans said. “In my mind, they have always been foundational figures of ERA, setting a standard of excellence rarely equaled. To be mentioned in their company was an amazing surprise to me, for which I am very grateful.”

ERA CEO Walter E. Tobin added, “Bob is a tireless advocate for ERA. His commitment to serving and strengthening our organizations through his work on the Chapter Leadership Council, the Chapter Officers Leadership Training (COLT) program and the Executive Committee makes him the natural choice as the recipient of the 2019 Tess Hill Award.”

Evans also is a recipient of the 2014 Ray Hall Spirit of ERA Award and 2011 Jess Spoonts ERA White Pin Award.