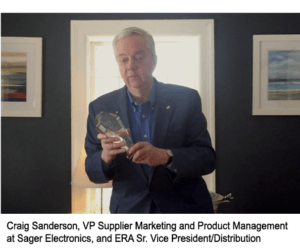 The Electronics Representatives Association (ERA) announced that Craig Sanderson, VP Supplier Marketing and Product Management at Sager Electronics, and ERA Sr. Vice President / Distribution, was the recipient of the Second Annual Tobin Bridge Award. The award was presented by Dave Norris of Norris & Associates and ERA Chairman of the Board on March 3, during the 2021 ERA Virtual Conference.

The award was created to honor ERA CEO Walter Tobin’s significant contributions to ERA and recognize his ceaseless efforts to build bridges of cooperation and collaboration between representatives, manufacturers and distributors in the electronics industry.

In a video message Norris said, “It is my honor to present this year’s Tobin Bridge award to an individual who for the last 45 years has lived the values we recognize with the Tobin Bridge award,” and added: “Someone once told me that integrity is what you do when no one is looking. It is doing the right thing, the honorable thing, not because of an expectation of recognition or accolades, but simply because it is the right thing to do. Anyone who has worked with Craig Sanderson over these 45 years will agree that Craig has always been a class act with unwavering integrity.”

Sanderson, who was notified of the award, stated in a recorded video message, “I am truly honored to receive the Tobin Bridge Award. Thank you for the recognition. But know that while this award was given to me, it really belongs to the many of you who have helped me and the Sager team throughout my career. This award means a lot to me.”

About ERA
The 86-year-old Electronics Representatives Association (ERA) is the international trade organization for professional field sales companies in the global electronics industries, manufacturers who go to market through representative firms and global distributors. It is the mission of ERA to support the professional field sales function through programs and activities that educate, inform and advocate for manufacturers’ representatives, the principals they represent and the distributors who are reps’ partners in local territories. For more information about ERA, visit era.org.