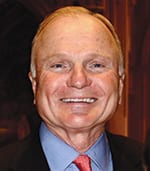 The Electronics Representatives Association (ERA) has announced that David Norris, president of Norris & Associates Inc. of Hingham, Mass., is the 13th recipient of the Ray Hall Spirit of ERA Award. Norris is the association’s current president and has served on the ERA Executive Committee since 2004.

Norris was nominated for the award by Cameron English on behalf of Arizona ERA. English said, “I am pleased to see Dave Norris nominated for the Ray Hall Spirit of ERA Award. Of all the people I have come to know in the rep business, Dave represents the highest standard of professionalism and class. Dave is well known to many of us, and his contribution to ERA goes without saying. What some may not know about Dave is that he is a mentor and a wise counselor to his friends and peers in the business. On many occasions, I have turned to him first when I needed perspective or insight. The amazing thing is that he always has a deeper, more informed, 360-degree view of most subjects than you could have anticipated.” English added: “I know the Ray Hall Spirit of ERA Award is a standard for those among us that carry the torch of ‘why reps,’ and I cannot think of a better representative among us than Dave Norris!

When notified of the award, Norris was overwhelmed, commenting, “I am honored and deeply moved to have been selected as the recipient of the 2018 Ray Hall Spirit of ERA Award. Ray was the driving force behind ERA for most of my nearly four decades as a member. All that I know about the rep business I have learned through the generosity and support of fellow ERA members. Ray led the charge as the ERA community grew and expanded its reach and relevance during his tenure as CEO. I only wish he was still with us so that I could thank him for all he did for our industry and for the professionalism of manufacturers’ representatives.”

The Ray Hall Spirit of ERA Award was presented at the association’s 50th Anniversary Conference on Feb. 26, 2019, at the AT&T Conference Center in Austin, Texas. As the award recipient, Norris received a full conference attendance and travel package.