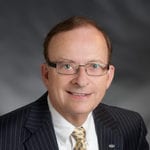 The Electronics Representatives Association (ERA) has announced that Mark Larson, vice chairman of Digi-Key Electronics is the recipient of ERA’s Lifetime Achievement Award.

The Lifetime Achievement Award was created to recognize individuals who play an integral role in supporting the manufacturers’ representative model in the electronics industry. The award was presented at the association’s 50th Anniversary Conference on Feb. 26, 2019, at the AT&T Conference Center in Austin, Texas.

When notified of the award, Larson commented, “The success that Digi-Key has enjoyed, growing from a tiny electronic component distributor to become the fourth largest distributor in North America and the fifth largest distributor in the world, has not happened by accident. Its growth is the result of the natural synergies that are inherent in the three-point sales relationship of the manufacturer, the manufacturers’ rep and the unique business model that Digi-Key created. It has been personally very rewarding to have had a part in creating this remarkably efficient sales relationship that serves the customer with minimal redundancy and minimal sales channel conflict. We often speak of “win-win” situations, or better yet, “win-win-win”. But amazing as it may seem, we have created a “win-win-win-win” — a win for the manufacturer, a win for the rep, a win for Digi-Key, and most important of all, a win for the customer.

Digi-Key joined ERA in 2016 as one of the organization’s fist global distributor members in support of ERA’s efforts to help facilitate the working relationship between the ERA rep company members, the corporate headquarters of distribution companies and their local branch operations.

Mike Swenson, CPMR, president of Mel Foster Company and conference committee co-chair who presented the award, added, “It is an honor to recognize Mark Larson of Digi-Key Electronics at ERA’s 50th Anniversary Conference with a Lifetime Achievement Award. Mark was a pioneer at collaborating with the manufacturers’ representative community to drive success with customers.”