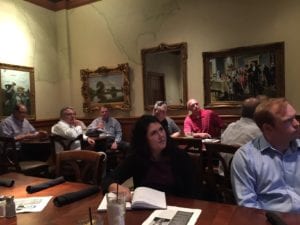 Members of the Southwestern Chapter of the Electronics Representatives Association (ERA) gathered on June 23, 2017, for its first cyber security networking lunch. The program was the first officially planned event of the newly established Texas chapter and it attracted more than 30 attendees.

The guest speaker was Jeff Shaffer, director at PricewaterhouseCoopers LLP. Shaffer joined PricewaterhouseCoopers in 2015, after 25 years with the U.S. Secret Service as a senior special agent and director of the top ranked Secret Service Digital Forensics Laboratory. Shaffer has worked on hundreds of forensic investigations related to cybercrime, IP theft and fraud, across numerous industries including energy, retail, banking, healthcare, telecommunications and federal/state governments.

“We had an excellent turn out for the first event of the Southwestern Chapter of ERA. The meeting was held in Dallas and the speaker led us through a comprehensive (and a bit terrifying) study on cybersecurity,” said Tobi Cornell, CPMR, VP distribution of Kruvand Associates, Inc. and the chapter’s secretary.

“Shaffer also discussed the potential ‘leak points’ for data in mobile devices, as well as the trend toward weak spots in IoT. Shaffer covered ways that can help protect us and our companies against these threats,” Cornell added.

The chapter is hosting its next event on Nov. 3, 2017, in Austin, Texas. Details on the location and speaker to be announced as the date approaches.