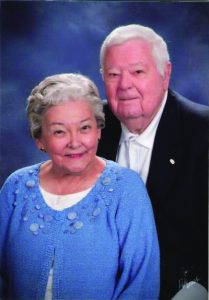 David and his wife, Nona.

With great sadness, ERA must report the March 23 death of W. David (Dave) McCoy, a member of ERA’s prestigious Hall of Fame and the decades-long owner of Cartwright & Bean, Inc., of Duluth, Ga. He was 87.

Dave started as a salesperson at Cartwright & Bean in 1953 (at the age of 19) and eventually became the owner of the 70-year-old rep firm that he grew into one of the largest in the nation. Throughout his years in the rep business, he was an active volunteer in ERA, first with the Dixie Chapter and then on the national leadership level. Even before he was elected to ERA’s national executive committee, Dave earned the association’s Key Award and was inducted into the White Pin Group in 1986. He began his six-year tenure as an ERA national officer in 1989, was elected president in 1991 and completed his service as chairman of the board from 1993 to 1995. A year later, he was inducted into ERA’s Hall of Fame at the 1996 ERA National Conference on Monterey, Calif.

Beyond his volunteer work for ERA, Dave held many executive positions with his church in Dunwoody, Ga., and was a founding father of Dunwoody Senior Baseball where thousands of young people have spent their summers.

A memorial service will be held on April 11 at Kingswood Church, 4896 N. Peachtree Rd. Dunwoody, GA 30338. In lieu of flowers, donations to the church will be appreciated.