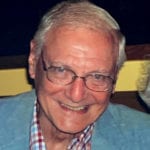 It is with great sadness that ERA must report the passing on Jan. 31, 2020, of Bernard C. Newman, Jr., former chairman of the ERA National Board and long-serving member of the ERA Insurance Trust Board. He was 92.

For a recent profile of Bernie and to read the highlights of his extensive volunteer efforts on behalf of ERA, see the “Where Are They Now” feature in the Summer 2019 issue of The Representor.

He established his rep firm, the Newman Sales Company, in 1960 and several years later was a co-founder of ERA’s Keystone Mountain Chapter (in the Pittsburgh area). After serving as the chapter’s national delegate for several terms, he was elected to the ERA National Executive Committee, eventually becoming the association chairman. He was inducted as a White Pin member in 1975 and was elected to ERA’s prestigious Hall of Fame in 1990.

He is survived by his wife Nancy, their three daughters — Gretchen Burdett (David) of Boynton Beach Fla.; Jill Giorgetti (Bobby) of Half Moon Bay, Cal.; and Ellen Newman (Justin Hill) of Irvine, Cal.— plus five grandchildren and seven great-grandchildren.

A celebration of Bernie’s life has been planned in the future at a time and place to be determined.