Chapter of the Year entries due March 1

The online entry form for 2016 Chapter of the Year entries (for 2015 activities) will be posted in January. All chapters are urged to submit one or more projects or programs for recognition. All award recipients in each of four categories — Education, Membership/Member Services, Marketing Services and Special Projects — receive a full-tuition scholarship for the Chapter Officers Leadership Training (COLT) program in 2016. Questions? Contact Tess Hill at thill@era.org.

CAROLINAS
Carolinas ERA is continuing its monthly networking breakfasts for reps and distributors in Raleigh and Charlotte. The chapter board held its annual fall planning retreat in late October in Wilmington, N.C. All chapter officers and directors were recently reelected for two-year terms, and Jean Rosa of TTI, Inc., was elected as a new director.

CHICAGOLAND – WISCONSIN
The chapter held a breakfast round table on Nov. 13 that focused on the topic of “When Principals Merge: How to Prepare, What to Expect, What to Do (or Not Do).” After the event, one attendee was randomly selected to use Chicagoland-Wisconsin’s Gold Sponsorship free registration for the ERA 2016 Conference. Eric Sagendorph, the outgoing chapter chairman, was chosen in the drawing.

On Feb. 4, this group is hosting an all-industry program featuring ERA’s CEO, Walter Tobin, as the speaker. His presentation is titled “How ERA Can Help Reps, Manufacturers and Distributors Adapt to the Future of the Industry.” 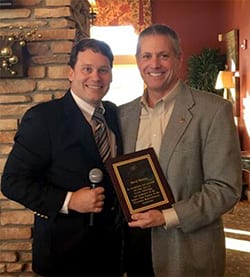 MID-LANTIC
The Mid-Lantic chapter held a networking event on Nov. 16 with ERA’s CEO, Walter Tobin, as a special guest. New membership is a focus for the chapter.

SPIRIT OF ST. LOUIS
The Spirit of St. Louis chapter is heavy into planning for its 2016 Electronics, Electrical, Engineering and Manufacturing Show. It runs on April 6 at the Orlando Gardens Event Center.

SOUTHWESTERN
ERA members in Texas attended a Dec. 16 “Meet and Greet” event in Dallas with Walter Tobin, ERA’s CEO. This was a free program for all attendees and was focused on networking, membership and spending time with both old and new friends.