From the brink to a new era for ERA … Thank you, Tom Shanahan!

Home → ERA Publications → Representor Archive 2016 → From the brink to a new era for ERA … Thank you, Tom Shanahan!

From the brink to a new era for ERA … Thank you, Tom Shanahan! 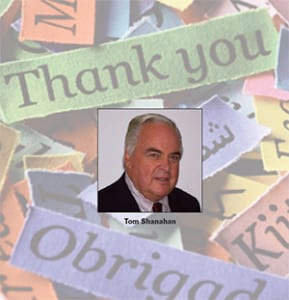 Some people can’t resist a challenge. They run toward the problem. When faced with a dilemma, they embrace it.

That’s where Tom Shanahan found himself more than 10 years ago. His dear friend, Ray Hall, had retired as ERA CEO after 40 years, and Ray’s successor backed away from the challenge that was the ERA of 2005. ERA was financially unstable and very close to the brink. The insurance laws had changed, devastating the highly successful and profitable ERA Insurance Trust, our main source of income. Membership was plummeting because ERA could no longer offer group medical insurance. Nevertheless, when asked to fill in while another CEO was sought, Tom embraced the crisis.

.
[Tom] eventually became ERA’s COO, and then, in 2006, he was named the CEO — with no pay! … Today we say thank you, Tom — despite your sincere wish that your retirement should be allowed to pass with no public recognition.

.
Tom made his first acquaintance with ERA in 1984 when he accepted Ray’s invitation to “stop by” the ERA Conference in London. Tom did just that and recalls that, as the late Jess Spoonts promised him upon his arrival, he met “many terrific people.” Not long afterward, the former federal prosecutor and then a prominent Chicago defense attorney began handling some legal work for both ERA and the Insurance Trust.

Tom and many of our members first got to know each other very well at the 1998 ERA Conference in Scottsdale, Ariz. He was half of a conference program called “Shanahan vs. Shanahan,” a memorable session that created a courtroom atmosphere, complete with opposing lawyers and attendees serving as jurors. The “case” being litigated involved then-still-relatively-new technology, including the Internet, e-commerce and email issues.

During ensuing years, Tom stayed involved with ERA on the periphery and made many friends. He says he admired the independent attitude and energy of the reps. I suspect the fun, the creative abilities and the reps’ desire to constantly improve also drew Tom closer to the fire.

He eventually became ERA’s COO, and then, in 2006, he was named the CEO — with no pay! Talk about embracing a challenge! That was 10 years, countless challenges and a slew of stories, laughs and meetings ago.

.
Today we say thank you, Tom — despite your sincere wish that your retirement should be allowed to pass with no public recognition. You believe that, in a volunteer organization, all the gratitude should go to the members. In this instance, however, the “jury” of your ERA friends has overruled you.

.
While he won’t take credit for it, Tom came in, stabilized ERA’s finances, stopped the membership plunge, kept a talented staff in place and guided us through a period of turmoil. As many have said, in many ways, “Tom took over ERA at a most tumultuous time and held the organization together, putting back the pieces in a positive way.”

Tom’s selfless leadership has reinvigorated ERA to the point where we can attract and hire an industry force like Walter Tobin as our new CEO. Tom’s contributions have brought us to a new era for ERA.

But, if you know Tom, you know that the following sentiments, all regarding him personally, are much more important to him. When I talked to others about Tom, just some of the comments and descriptions I received were: “fortunate and blessed to have him;” “mentor;” “true rep advocate;” “stood up for ERA, even when he or his position wasn’t popular;” “great friend and great boss;” “friends for life;” “will always be in his debt;” “he always bled ERA;” “he’s a people person;” “he’s a rep person.”

While these are sentiments anyone would be proud of, there are two words that will be forever associated with Tom Shanahan: family and stories! His wonderful wife, Lorene, was there at the beginning. An outstanding corporate lawyer herself, she was the other Shanahan in “Shanahan vs. Shanahan.” And, most will say, she was the debate and court case winner that day in Scottsdale — by a mile!

Since that presentation, we have all benefitted from Lorene’s organizational skills, hospitality and infectious laugh. At conferences, board meetings, EDS and many other ERA functions, Lorene has been an unsung (and unpaid) ERA supporter. Thank you, Lorene!

And then there’s Meg! Or, to many, “Mugs.” Meaghan, the youngest of Tom’s four children, has grown up in ERA and calls many reps “uncle.” Through conferences, meetings and local gatherings, she was always there to lend a hand. As we have had the pleasure of watching Meg mature — she is now a senior at the University of Iowa — she has watched us grow as well, always with a smile, a story and a funny remark. (She is definitely her Dad’s daughter!) Thank you, Meg.

As for the stories? Oh, the stories! You all know there is not enough time, or paper, to adequately describe the stories. You name it — family, old and new friends, his Dad, his 100-year-old, sharp-as-a-tack Mom, Chicago, Germany, politicians, Italy, ERA, law and the price of tea in China! There was always a story, filled with great laughs and even better memories. Thank you, Tom.

In the end, some will say ERA still has many challenges. Of course we do! What company, government or entity doesn’t? Pick your favorite U.S. President. (Ronnie, please come back!) Were there challenges when he left office? Will there be challenges when the current and the next president leave? Of course, there will be.

ERA lived to fight another day. We’re better off today than we were 10 years ago.

Walt Tobin is storming the country, carrying the torch and delivering the message! Thank you, Tom!

Here’s one final quote from one of Tom’s countless friends in ERA: “We should all be grateful!” Agreed. One more time … thank you, Tom!