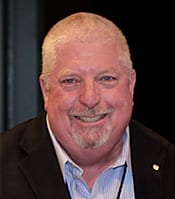 For this edition of The Representor, I am pleased to turn over this space to my fellow rep and good friend of almost three decades, Mark Conley, ERA’s past president and chairman of the board. Recently, as Mark and I were sharing an adult beverage at a principal’s rep council meeting, he began relating the highlights of a wonderful article he had just read regarding MBAs and their impacts on U.S. manufacturing. The more he spoke, the more mesmerized I became, and so this new column for The Representor was born. Congratulations to Mark for developing this thought-provoking letter, and stay tuned. The topics he addresses are on the agenda of ERA’s 2017 Management and Marketing Conference in February.

.
… Manufacturers are making ever-increasing demands on their field sales representatives and distributors, and I fear that the impacts on their own businesses will be far greater than the manufacturers realize.

In your position as president of ERA, and based on recent conversations we have had, this letter is intended to express my thoughts about the state of the electronics component industry and business in general.

To put it simply, manufacturers are making ever-increasing demands on their field sales representatives and distributors, and I fear that the impacts on their own businesses will be far greater than manufacturers realize. I believe ERA has an important role to play in addressing this issue, and so here are a few pertinent facts to consider along with some of my personal perspectives.

FACT: Reps and distributors are the eyes and ears of their principals/suppliers within every local market, and no direct sales force will replace this “presence” and source of market intelligence, especially given the historically fleeting tenure of the average direct outside salesperson within a territory. By comparison, most reps and distributors spend their entire careers in one territory.

Manufacturers used their strong leverage to influence reps to accept this structural change — an adjustment that has had numerous negative results. When you add the impact of average selling price erosion of 5 percent per year and the increase in house accounts, the impact on reps has been dramatic.

MY PERSPECTIVE: Due to the nature of Asian-based business, manufacturers have had to hire (mostly) direct salespeople in Asian countries. I believe little value has been derived from this direct sales force. As a matter of fact, I could argue that this same Asian sales force is at least partially, and maybe primarily, responsible for the incredible price erosion in the industry over the last 10 years. So, in addition to reps having to take full responsibility for designs in North America and taking a 30 to 50 percent commission cut for doing so, they have taken additional pay cuts due to the pricing erosion manufacturers have experienced offshore.

FACT: Distributors are experiencing similar consequences with higher profile business. Manufacturers’ territory sales managers are, more than ever, taking it upon themselves to dictate the margins their distributors will make. Unfortunately, “higher profile” pieces of business don’t necessarily equate to larger dollar opportunities. Once again, price erosion, stemming from Asia, has squeezed the margins of manufacturers, and that erosion has flowed down to distributors.

FACT: In addition, manufacturers are requiring even more commitments from their reps. In the long-gone “good old days,” reps were paid a full commission rate in exchange for the expectation of being “hunters,” responsible for creating demand. Manufacturers maintained the responsibility of handling the marketing and customer service functions, and CRM programs (i.e.: SalesForce.com and others) did not exist. Today, despite the fact that many or most manufacturers’ representatives’ commissions have been cut (see above), many manufacturers rely on their representatives to add a great deal of time in the “gathering” mode to their growing repertoire of responsibilities. Gathering and inputting data into their databases, called CRMs, are now the norm, taking very precious time away from representatives’ original responsibility to create demand.

MY PERSPECTIVE: Many of the newer demands by manufacturers stem from the impact that MBAs, most of whom have finance backgrounds versus any experience in sales, have had as their influence in management has increased over the years. These MBAs think of rep commissions as an expendable expense versus an investment in their sales forces.

In a recent blog post by Time Magazine economist Rana Froohar, she states that the negative impact that MBAs have had on business is extraordinary. Following are a few of her comments.

.
MY PERSPECTIVE: The “China Syndrome,” as described above, has had a very strong impact on our business leaders today, and I believe the conversation in our industry needs to return to a laser-like focus on the integrity that should be the foundation of rep-manufacturer-distributor partnerships and on our dealings with customers.

The time has come for ERA to force this conversation to a higher level. If we fail to do so, the consequences will be more of the same, and the “commoditization” of all electronic components will be pervasive.

Mark Conley is ERA’s former president and chairman of the board. You can contact Mark by email at mconley@odonnell.com.