ERA-ECIA BREAKFAST AT EDS COULD BE LARGEST EVER

The annual ERA-ECIA (Electronic Components Industry Association) breakfast program at EDS 2016 appears to be drawing record-setting attendance. More than 400 registrations had been received by mid-March for the event scheduled on Thursday, May 12, from 6:45 to 8 a.m. in the Mirage Hotel Events Center. The breakfast is open to all EDS attendees at no charge.

The guest speaker will be Don Hnatyshin, chief supply chain officer of Jabil. In his position, he leads a team of 4,000 supply chain and procurement professionals responsible for $15 billion in annual spending with 20,000 suppliers. His presentation will focus on “The Digital Economy: Impacts on the Design Chain, Manufacturing and Supply Chain.” 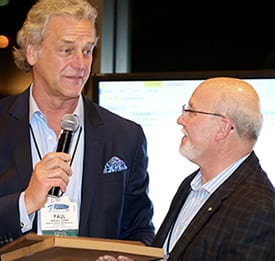 During ERA’s 47th Management and Marketing Conference, held Feb. 28-March 1 in Austin, Texas, the association announced several major awards. The 2014 Ray Hall Spirit of ERA Award had been announced previously, but the conference was the first opportunity to present the award to Bob Evans, CPMR, of EK Micro. (See photo at right.) Evans has served in many leadership chairs of Chicagoland-Wisconsin ERA and is now a member of the team that designs ERA’s industry surveys. He also chairs the association’s Chapter Leadership Council, which manages the Chapter Officers Leadership Training (COLT) and Chapter of the Year recognition programs. 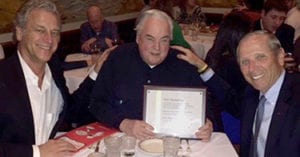 .
The 2015 Ray Hall Spirit of ERA Award had been presented in early February to ERA’s recently retired CEO, Tom Shanahan (see photo at left), but it was announced for the first time at the conference. Shanahan was recognized for his unselfish leadership of ERA through some difficult years. The surprise presentation was made during a dinner in Chicago hosted by ERA Chairman Paul Nielsen, CPMR, and CEO Walter Tobin.

The Ray Hall Award was established in 2004 to honor the retired CEO who had served the association for more than 40 years. The award recognizes individuals who exemplify the spirit of ERA through their commitment to serving and advancing the professional field sales function. 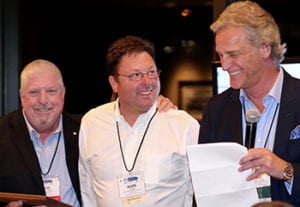 Also honored at the conference were consultant Bob Terwall, ERA’s past association president, and Mark Conley of O’Donnell Associates North, ERA’s immediate past chairman. By unanimous vote of the ERA Board of Directors, Terwall was awarded an Honorary ERA Membership. Conley received the first ERA Key Award that’s been presented in more than 10 years. (See photo at right.) He was singled out for his “superlative leadership and unflagging support of ERA, its members and projects.” This presentation was also a “total surprise” to Conley, who credited his company team for allowing him to volunteer so freely. He also acknowledged the “many great friendships” he has formed because of his involvement with ERA. 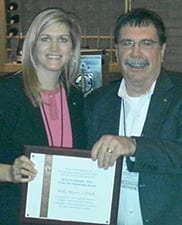 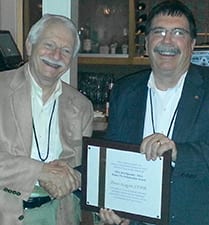 The ERA White Pin Group, whose members have served at least two years as volunteers at the national level of the association, presented two awards at its 2016 reunion, held during the recent ERA Conference in Austin, Texas. The 2014 and 2015 Jess Spoonts – ERA White Pin Group Scholarships were presented by the Group Chair, Mark Motsinger, CPMR, to Bruce Scoggin, CPMR, of Electro-Rep Associates, and Holly Myers, CPMR, of Wallace Electronic Sales. (See photos at left.) The awards are named for the late Jess Spoonts, ERA Hall of Fame member and long-time coordinator of the White Pin Group. The award salutes individuals who have provided exemplary leadership within ERA and who are committed to continuing their volunteerism.

… the passing on Jan. 1 of Leroy Moss, the owner for many years of Moss Marketing, one of ERA’s oldest member firms (since 1936). While managing his multi-territory company, headquartered in Denver, he helped shape the ERA organization in the Rocky Mountain area. The Life Member of ERA is survived by two children, three grandchildren and three great-grandchildren. The family has requested that memorial donations be made to the National MS Society, P.O. Box 172625, Denver, CO 80217.

… the loss in mid-January of Tom Mollard, formerly of Mollard Marketing in Los Altos, Cal. He was 89. The Navy veteran of World War II and graduate of Santa Clara University was a long-time ERA member and also served as a director of the Wescon trade show. Survivors include two daughters, three grandchildren and three great-grandchildren.

… the Jan. 24 passing of Ron Chalman, founder and longtime owner of Chalman Technologies in Southern California. He was 80. He was an electronics industry veteran with special knowledge of glass-to-metal sealing and a speaker at many conferences. In the 1970s and early 1980s, he was vice president and general manager of Tekform Products Company in Anaheim, Cal., and was heavily involved in the development of hermetic package design and technology. He consulted with JEDEC (Joint Electron Device Engineering Council) of the Solid State Technology Association to develop some of the early hermetic standards covering this topic. In 1986, he fulfilled a dream and founded the rep firm, Southern California Technical Services (later becoming Chalman Technologies), where he worked with his sons, daughter and others until just recently. Survivors include his wife, Marlene Chalman, two sons, three daughters and 12 grandchildren. In lieu of flowers the family suggests donations to the CHOC Children’s Hospital, 1201 W. La Veta Ave., Orange, CA 92868, choc.org, or to the Wounded Warrior Project, P.O. Box 758518, Topeka, KS 66675-8518, woundedwarriorproject.org.

… the death in mid-February of Eugene (Gene) Peake, Jr., founder of the CERCO rep firm in San Diego. He was 76. After graduating from Finley Engineering College, he began his electronics career with General Electric in Syracuse, N.Y. , and ended up 10 years later in San Diego where he established his rep firm. He continued working in his firm until stricken with brain cancer. He was a long-time leader of the San Diego Chapter of ERA, was inducted into the White Pin Group in 1985 and received ERA’s prestigious Honor Award in 1990. He is survived by his wife Carol, two sons, two step-daughters and seven grandchildren.