.
CAROLINAS
The Carolinas Chapter is continuing its monthly networking breakfasts throughout the winter.

The CERA 13th Annual Dick Paden Memorial Golf Tournament was held on Oct. 10, 2016, at Wildwood Green in Raleigh, N.C. Hurricane Matthew caused some setbacks, but the tournament went on. 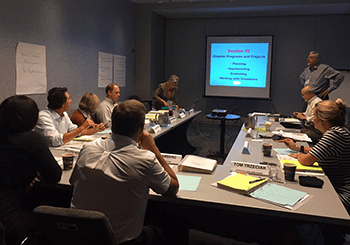 Charley Cohon, CEO of MANA (Manufacturers’ Agents National Association), will join members on Jan. 13, 2017, for a round table discussion about reps adapting to changes in the industry.

The chapter is proud to be sponsoring the upcoming ERA 48th Marketing and Management Conference in Austin, Texas. Chicagoland-Wisconsin also grew its membership by four members in 2016.

The chapter was fortunate to have Julie Baker of GMA attend COLT.

Empire also grew its rep and distributor membership in 2016. Continued growth and leadership training are goals for the chapter in 2017, along with the addition of new content based on shared best practices from fellow chapters.

The chapter also held its latest board of directors meeting on Nov. 11, focusing on the 2017 annual DTAM meeting. The DTAM presentation is planned for April 2017, with a possible combined program to include a presentation from a member of the ERA consulting staff.

The chapter also sent Alex Cox of Cox Corp. to COLT for training.

SPIRIT OF ST. LOUIS
The Spirit of St. Louis Chapter held a holiday dinner on Dec. 14 at Paul Mineo’s in Westport Plaza. The chapter also held a chapter meeting on Jan. 9 at Spiro’s West restaurant in Chesterfield, Mo.

TEXAS
The chapter held an event on Nov. 15 titled, “Paving the Way into the Future.” The program focused on the mechanics of re-establishing the ERA Texas Chapter, top line growth and best rep practices. ERA CEO Walter Tobin attended the event and served as the program moderator. The panel members were Jim Olson of Erickson Sales, David Frager of Intellimark and Jeff May of Logix Sales.