Chapter of the Year Awards announced

At its 50th Anniversary Conference, held Feb. 24-26 in Austin, Texas, the Electronics Representatives Association (ERA) announced the chapters that have been selected as Chapters of the Year award recipients for their 2018 activities. The awards are based on four categories: Education, Membership/Member Services, Special Projects and Marketing Services.

The award recipients were:

CAROLINAS
Carolinas ERA is hosting bimonthly breakfast meetings. The chapter is planning an educational event featuring a Cyber Security expert in the spring. Details to come soon. The chapter also held its annual DTAM and 2019 Rep-Distributor Forum meeting on March 4.

CHICAGOLAND – WISCONSIN
The Chicagoland-Wisconsin Chapter held its spring program on April 5. The program featured a round table discussion and ERA Conference wrap-up highlighting the two must-see breakout sessions, “The Sales Person and Rep Firm of the Future!”

INDIANA – KENTUCKY
On April 11, Indiana-Kentucky ERA sponsored a “for fun” gathering at Top Golf in Fishers, Ind. The only competition was within the foursome so it was fun for golfers, non-golfers and families alike. 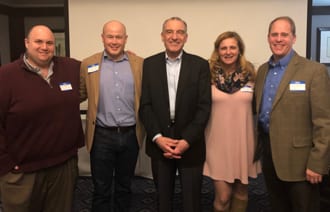 NEW ENGLAND
New England ERA held a dinner event on March 27 at Waxy O’Connors in Lexington, Mass., The event featured guest speaker ERA Consultant Cesare Giammarco who presented “The Profile of the Manufacturers’ Rep Firm of the Future.” Giammarco’s presentation, which was also one of the most well-attended breakout sessions at the 2019 ERA Conference, focused on how the roles and responsibilities of the successful rep have changed over time. He addressed what the successful manufacturers’ rep company of the future will look like, and what can reps do now to position themselves for success.

METRO NEW YORK
The chapter has set the date of June 24 for its Fourth Annual ERA Charity Golf Outing at St. George’s Golf and Country Club. Details to come soon.

NORTHERN CALIFORNIA
Northern California ERA hosted a dinner event on March 26 featuring guest speaker David Ginsberg, vice president of supply chain for Sonic Manufacturing Technologies Inc. Ginsberg’s presentation, “The Digital Supply Chain: Better, Faster, Cheaper & Now,” focused on the how-to and why of digital supply chains for the electronics industry and beyond; making inquiries into the limitations of yesteryear’s model, the tech that can literally be deployed today, and the measured cost and performance of the new digital supply chain as a competitive business and marketing strategy for tomorrow. 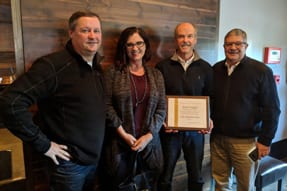 PACIFIC NORTHWEST
Jennifer Eby, secretary of the Pacific Northwest (PacNW) Chapter, led the first local “Women in Electronics” Seattle-area chapter event. Applied Technology Services, a large contract manufacturer in the Seattle area, hosted the event. Twelve women from all parts of the electronics industry were represented at the event, including distributors, manufacturers, EMS companies and OEMs.

On Jan. 30, PacNW ERA held a post-holiday networking event at the Bellevue Brewing Company in Bellevue, Wash. This was the first event in the Seattle area that was open to representatives, distributors, and in one case, a principal in over 10 years. Close to 30 participants discussed industry trends, concerns and changes. The chapter plans to do two more similar functions in 2019.

In appreciation of his outstanding contributions and achievements to the electronics industry and ERA for more than 37 years, ERA-PacNW recognizes Mark Taylor, formerly of EBCO, with the 2018 Life Membership Award.

During his 37+ years as a representative and owner, Taylor has held various positions with PacNW ERA and has participated in numerous National ERA conferences.

“Mark Taylor’s accomplishments speak for themselves. He has been a testament to what it takes to be a leading manufacturers’ representative for such an extended tenure, he is a tremendous example to all of us in the industry,” said Dave Fitzgerald, president of PacNW ERA.

SOUTHWEST CHAPTER
The chapter will be holding three events in 2019. Each is scheduled to be a lunch event, and the dates are tentatively set for June 7 in Dallas, July 12 in Austin and Nov. 1 in Houston. Southwest ERA also is considering organizing a donation aimed to support STEAM in schools in the area. Up for consideration are ideas like FIRST Robotics (in various divisions), donations at campuses for STEAM activities, sponsoring school events or teams for STEAM, etc.

SPIRIT OF ST. LOUIS
The Spirit of St. Louis Chapter is reporting membership growth with 30 current members. The chapter is working on slowly reorganizing to fit the ERA National model by implementing changes to its bylaws and being cognizant of having distributors, manufacturers and reps, all working together. The chapter also is reorganizing its local show to include more seminars along with limited floor space and times.