Representor Spring 2019 - Where Are They Now?

ERA has had a limited number of iconic leaders, just as in the world of politics and business. This column is designated to salute their efforts and celebrate their accomplishments and contributions to ERA, our proud trade association. We are honored to recognize Bruce Anderson who epitomizes the perfect rep in the eyes of many. Keep reading and you will find out why he’s a “Hall of Fame” recipient. 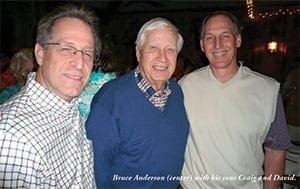 Where is Bruce Anderson now …

ERA asked me to let you know what old reps do. So, I am writing this on my 84th birthday from Bonita Springs, Fla. Hope you will not be bored. I was born and raised in the Chicago area, received a B.A. in economics from Ripon College where I met my wife Ann, then received an MBA from Indiana University, followed by service to our country as a Nike missile battery commander. In 1960, my father offered me a job in his five-year-old rep firm selling electronic components. The transistor had just been developed. We were off on a wild ride of success and growth!

My father encouraged me to get involved with ERA, which I did with the Chicagoland-Wisconsin Chapter. I also attended the first Business Management Institute at the University of Illinois. I was present at the second annual ERA conference in 1964 and every successive one until my retirement in 2000. The ERA conferences made me aware of the advantages of continuing education, networking and success by giving back. While our firm grew and prospered, I received great satisfaction from my friends, colleagues and industry involvement. A “rep study group” evolved where we met annually to exchange information on our successes and failures, borrowing from each other to improve our organizations.

I served as president of the Chicagoland-Wisconsin Chapter, and then chaired both the National Business Committee and two annual conferences. I was later elected as the vice president of ERA National, and served 12 years on the Executive Committee (XCOM) going through the chairs to president and chairman. At the same time, I was a board member and president of the EDS Show Board. During this period, my sons, Craig and David, joined our growing firm.

At the 1984 ERA Conference held in London at the White Pin Dinner, we raised $250,000 which was used as seed money to create the Manufacturers’ Representatives Educational Research Foundation (MRERF). The XCOM asked me to get it started. We recruited an education doctoral student, Marilyn Stevens, and provided her with an office in our building. Dr. Stevens completed her doctoral studies in continuing education and became the Executive Director of MRERF. I was president and Ray Hall used his contacts to recruit 40 other industry associations to become members of the foundation. This led to the CPMR program, where I served as president earning my own certification. My sons, Craig and David, followed my lead.

After retirement in 2000, Ann and I purchased a home in Bonita Springs, Fla. We spent half the year in Florida and the other half in Illinois. Besides travel, boating, golf and making many new friends, we did volunteer work. Ann helped raise money over an eight-year period to build a hospice facility for the community. My cause of choice was Habitat for Humanity where neighbors formed a group to raise funds for H4H building homes for families in need in our area. I was assigned the task as construction supervisor for 80 “nail pounders.” We built as many as six homes in a four-month season. It was very rewarding at the end of a day when you can step back and see what you have accomplished. Other activities included programs for local veterans in need, raising funds for after school educational programs, and securing and improving land for low income housing. The late President George H. W. Bush discussed the “Thousand Points of Light” in support of volunteerism. They are everywhere! Participating in them is a very gratifying experience for an old rep.

I have maintained a relationship with Sumer Inc. They kept me on as non-executive chairman, bouncing ideas off of me and occasionally asking my advice. Sadly, my son David recently died which drew me closer to the firm again. Meanwhile, two of Craig’s sons have joined the firm: that makes Sumer Inc. a fourth generation firm! Is that a record for ERA?

My wife, Ann passed in 2010 after a five-year battle with cancer. She was my light, my compass and a terrific “first lady.” I now live with my partner Judy and plan to move into a retirement facility in Naples. Come see us when you are in southwest Florida.