At its annual conference, held Feb. 23-25, 2020, in Austin, Texas, the Electronics Representatives Association (ERA) announced the chapters that have been selected as Chapters of the Year award recipients for their 2019 activities. The awards are based on four categories: Education, Membership & Member Services, Marketing Services, and Special Projects.

The award recipients were:

CAROLINAS
Carolinas ERA canceled its March 16 DTAM event and instead sent chapter members the DTAM report and information on the 2020 scholarship recipients via email and held a virtual meeting on March 23.

The chapter congratulates Greg Thompson, CPMR, of South Atlantic Component Sales who was chosen as the recipient of the 2019 Jess Spoonts White Pin Award.

CHICAGOLAND – WISCONSIN
Chicagoland-Wisconsin ERA is planning its summer baseball event for Aug. 13 at Miller Park for a Brewers game. The chapter hopes to plan more member events and activities after social distancing and travel restrictions have been lifted.

EMPIRE STATE
Empire State ERA is getting ready to unveil its new website — www.empireera.org. Once completed, the website will allow members to access information on upcoming chapter events, registrations, member listings and more.

Earlier this year, the chapter unexpectedly lost a dear friend, colleague and board member, Julie Baker. A recent COLT graduate and long-time Secretary/Treasurer, Julie served with humor, grace and professionalism that was felt far beyond her role in Empire ERA. Empire ERA would like to thank the entire ERA community for their heartfelt support and particularly ERA National staff who have supported the chapter to move forward.

To honor Julie’s memory, the chapter is rededicating its annual Golf Charity Event in her name. Please look out for this event and cause as a meaningful way to remember Julie. Golf Chair Rob O’Rourke and VP Membership Laura Senn-Sanborn will be releasing information on charitable donation opportunities on the Empire ERA website. 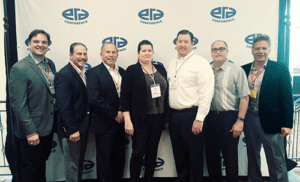 This year, the chapter has announced that it will award a $1,500 scholarship for education to an active member of ERA. This scholarship will be used to send the recipient to the ERA Annual Conference in Austin, Texas, in February 2021.

SOUTHERN CALIFORNIA
The chapter has started planning for its Annual Charity Golf Tournament scheduled for November 2020. The chapter will again be raising funds for Operation Homefront.