Representor Spring 2020 - Where Are They Now?

I’ve made a discovery! Exceptional reps never stop working! At the very least, that applies to our latest two Where Are They Now? ERA icons as well as many of the others who have already been profiled. Tim Eyerman and David Rossi personify sharp energetic businessmen who would have excelled in any walk of life, but fortunately, they chose our exciting world of electronics. Read on and discover why these men are so special. Clearly, they are no longer in it for the money, but more for the passion and challenges of our business.

Where is Tim Eyerman now?

I started my journey in the electronics industry at Western Electric Columbus Works, which was co-located with the Bell Telephone Laboratories, working as a process engineer for Ron Smith, a legend in Bell Telephone lore. My job was to assure manufacturing readiness so that everything followed Bell System standards. My seven-year tenure was interrupted by my service in the United States Army Signal Corps. I was stationed in Georgia, Washington, D.C., and Korea, designing, installing and maintaining secure communication equipment.

In 1966, my wife Bette Jean and I moved to Rockville, Md., where she continued her career with the U.S. government. I went to work for CEI (Communication Electronics Incorporated). CEI, later to become Watkins-Johnson, who manufactured very sensitive radios used primarily for intelligence gathering during the Cold War. I wore many hats during my 14-year tenure and became well acquainted with several government agencies.

In September 1975, I lost my wife to cancer. In October 1978, I married Kathie Myers and we merged our family of three children. In January 1980, along with Curt Collart, we started CEtech Electronics Corporation, a very specialized rep company focused on Custom RF/Microwave Products. Our target market was U.S. government agencies and their sub-contractors.

CEtech Electronics Corporation joined ERA in 1983. We recognized that as a small independent company, we had little ability to influence issues that were detrimental to our business. As a member of ERA, the collective clout was much more effective. Shortly after joining ERA, one of the largest manufacturers in our territory, Westinghouse Defense, decided that they would try to eliminate the reps’ commissions on all of their purchases. If this large aerospace company were to succeed in replicating the Walmart model of cutting out reps, the rep industry would be in serious jeopardy. Reacting to this crisis and on behalf of ERA, I met the Westinghouse director of material. We discussed what he was advocating plus the legal, practical and moral issues he would have to deal with if he went through with it. I also invited him to our upcoming National Management Conference in Bermuda. As a result, he reversed his position and even elevated the importance of using reps at Westinghouse. I was honored to receive the ERA Key Award for addressing this situation.

Not long after mitigating the situation with Westinghouse, I was asked by ERA’s XCOM to serve on a task force that would address a perceived lack of professionalism in the electronics representative sales field. ERA partnered with The Wharton School, specifically Dr. Erin Anderson, to conduct a nationwide survey across the industry. I worked closely with Dr. Anderson on this project resulting in ERA’s “Commitment to Excellence Program” introduced at the 1988 ERA Management Conference in Washington, D.C.

In 1984, with the increased use of PCs in sensitive situations, the National Security Agency (NSA) issued a classified attenuation specification for all PCs used in that environment. Many companies were trying to comply. Since none of my principals offered a compliant filter solution, I started Emicon Corporation. In the beginning, I used one of my principals in El Paso, Texas, as my subcontractor assembly source until 1993 when I set up a stand-alone assembly facility there. Engineering, sales and administration were conducted in my Maryland office. Essentially, I had two full-time jobs as a rep and a manufacturer.

In 1989, I began my 10-year tenure on ERA’s XCOM culminating with my being president and two terms as chairman of the board. During this period, the Rep Certification Program started while I was serving on the MRERF Board of Directors. I was part of the first three-year cycle that was completed in 1993. We were the first ERA reps to be awarded CPMR certifications. ERA also reached out to other associations in the electronics industry to find common ground. This informal association of associations met frequently in Washington, D.C., and even briefed the executive branch on the state of the electronics industry on multiple occasions. ERA’s involvement with the Small Business Legislative Council (SBLC) lobby gave us the ability to bring important issues to our members, such as the Association Health Plans (AHP), and the lawmakers on Capitol Hill. Because I lived in the DC area, I was able to participate in all of these activities. ERA became more international with our participation in electronica, forming chapters in the U.K. and Mexico. We also participated in electronica Asia. I was surprised and greatly honored during the 2000 ERA Management Conference in Baltimore to be inducted into ERA’s Hall of Fame.

In 2002, Kathie and I moved to El Paso, Texas. Since moving to El Paso, CEtech Electronics Corporation has become a management consulting firm concentrating on helping niche European companies in the RF/Microwave business. Emicon Corporation remains strong and I am still the CEO.

I published my autobiography, “My Unexpected Life,” in 2018. I hope to go to press later this year on my latest book, “Not the America I Grew Up In.” Beginning five years ago, you will find Kathie and me on the north shore of Lake Chapala in Jalisco, Mexico, during the summer. I have been blessed by God to have such a long and interesting life and to have made so many friends all over the world. ERA has been a big part of that! 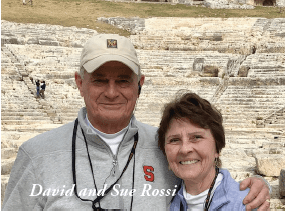 Where is David Rossi now?

It’s hard to believe that 37 years ago, I started Empire Technical Associates. It may be harder to believe that I was never a rep before my wife, Sue, and I made that decision. Possibly, ignorance is bliss, but after so many corporate moves, we were ready to settle down and return to where my wife, a school teacher, and I grew up.

I graduated from Clarkson University with an engineering degree and we went off to St. Louis to work for McDonnell Aircraft.

In those early years, the U.S. was in a space race with the Soviet Union to get to the moon. I was in a one-year management training program with six other engineers and non-technical graduates. I ended up working with thick film and printed circuits that went to the Mercury and Gemini space programs. While at McDonnell, I was fortunate enough to have the company pay for my MBA, an incredible benefit. Our first child was born and my wife would no longer teach on a full-time basis.

“Dave is a proud supporter of all-things related to Syracuse University Athletics. He is passionate about his family, his business, his friendships and his golf game! He is a man of his word and a true gentleman. I am blessed to have met him and played a few rounds of golf with him. His competitive nature and great sense of humor make spending time with him a pure joy.”

Not long after I received my MBA from Saint Louis University, a Chicago printed circuit company saw a publication a colleague and I had published entitled, “Etch Back … Is It The Answer?” Several months later after being contacted, I accepted a position as Basic Electronics general manager. I was off and finally running a business.

I’ll never forget my first day on the job when the owner, a self-made titan/ex-marine, came into my office and asked me if we had enough money for payroll on Friday. When I said that I didn’t know, he said that maybe I should find out before I did anything else! That was my first experience with managing a payroll. I learned quickly that cash was KING! My time there was like an MBA on steroids! The company owner was a great teacher and became a wonderful mentor!

From running a moderate size company to then accepting a job with Motorola was another move that gave me the experience to run a more complex company. After several years, I was asked to start a new division in Puerto Rico, but it was a two-year assignment. They paid for private schools for our three children. After my tour, I was recruited to run a ceramic capacitor company, owned by Phillips Corporation located in upstate New York, which just happened to be where our families were from. When Phillips bought Centralab, I had to close the New York operation and move to Texas. I was a general manager for Centralab’s division which included assembly in Juarez, sales and marketing in El Paso with R&D and production in Los Angeles. This was the first time I interacted with representatives. Now and then, I would travel with reps to key accounts absorbing what the rep function was all about because I had to approve monthly commissions. I was intrigued by reps who would pick me up at the airport, complete business, drive me back to the airport, I’d jump on a plane and they would drive home!

Fate entered in when one of our rep companies, in late December 1982, informed us they were going out of business because their salespeople were not being paid. At that point, my wife and I decided if we were able to talk to the employees and their principals and Philips would agree, maybe we could finally “go home” and run our own business. After interviewing the employees, we decided to hire two of the outside people, two of the inside people and I was the third salesperson. We were able to convince the existing principals it would be easier to keep the same experienced staff they were familiar with than to close everything down. With that fortunate situation, Empire Technical Associates was launched in April 1983. Along the way, we purchased an IC centric rep company, a microwave rep firm, and started our fourth company in New England, which was sold 13 years later to the original staff I had hired.

A key decision we made early on was to join ERA. This enabled me to interact with other owners and discuss ways to help each other grow without jeopardizing confidential information. Along the way, I became active in ERA and EDS and moved through various committees and eventually was elected president, ERA Board chairman and EDS president. I was fortunate to have many people who helped me make the transition from engineer to a business owner. My supportive wife of 57 years was a wonderful partner and best friend! I would be remiss if I didn’t also give a big THANK YOU to several people who helped me on this incredible journey … Ray Hall, Tom Shanahan, Tess Hill, Karin Derkacz, John Denslinger, Bob Walsh and our excellent staff at Empire Technical Associates!