Representor Summer 2020 - Where Are They Now?

Can husbands and wives live and work happily together 24/7/365? Most people would say no, but somehow, some way Roger and Peggy Ponto made it happen! They are truly an exceptional couple! Both are talented, professional retired reps who have made numerous contributions to ERA with their smarts, time and energy. Both have roots from best-in-class companies. Roger as a VP of the prestigious Shure Brothers Company and Peggy from one of the most celebrated rep firms in our industry, the Mel Foster Company Inc. How’s that for credentials? Perfecto, IT WORKED!

Read on, it’s a great story. 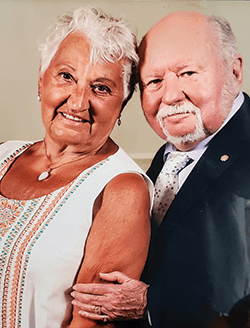 Where are Roger and Peggy Ponto now?

In 1979, and after a 17-year tenure as a national sales manager at Shure Brothers, I relocated to a suburb of Seattle to join an existing representative organization as head of their consumer products division. Quickly I had the firm join ERA to become an active member. While at Shure, we became the first significant manufacturer to endorse qualified ERA reps. Immediately, I was recognized for the understanding I had as a past manufacturer/principal in managing rep relationships. I founded Roger Ponto Associates in 1980 with my future wife Peggy and son Scott. I held several leadership positions with ERA from 1985-1997. In 1985, I was elected to the executive committee serving in various roles including chairman, VP/audiovisual group, VP/education and director of industry development. I was inducted into White Pin at the Bermuda Conference in 1986 and as a Life Member of ERA in 2000.

Throughout my years as a member of ERA and the numerous conferences I attended, I learned a great deal from my fellow reps who willingly shared their invaluable intellectual property.

Outstanding mentors like Jack Berman and Gene Foster were focused on improving the rep function. The electronics industry has always been ever-changing, and representatives have had to be adaptable and forward-thinking in order to meet the needs and opportunities available.

Our home in the Seattle area was near the U.S. Coast Guard Admiral’s Quarters for the 13th CG District.

In 1999, the Admiral asked both Peggy and me to become charter members of a new Navy League of the United States Council being organized in the area. In 2001, I was elected president of that council, the Lake Washing Council NLUS and served for two years. I was later elected as national director for NLUS and served for seven years. The Navy League is a 100-year-old citizen maritime support organization serving the Navy, Marine Corps, Coast Guard and Merchant Marines. In 2010, a three-star Coast Guard admiral honored me with the Distinguished Public Service Award, the highest award the Coast Guard can present to a civilian.

In 1999, Roger Ponto Associates was dissolved. My son, Gary, and I created GP Marketing, specializing in security and surveillance products. Meanwhile, Scott started Ponto Associates serving the consumer and computer marketplace. To this day, both companies continue to thrive.

Peggy and I drifted into full retirement and in 2014 moved to Port Ludlow, Wash., on the Olympic Peninsula overlooking beautiful Puget Sound. We are enjoying the golden years of our lives together while actively participating in community activities. I will be 89 in August of this year and can be reached at roger@ponto.com.

In 1987, ERA meant one thing to me, and it wasn’t the Electronics Representatives Association. This changed the day I walked into Mel Foster Technical Sales in Edina, Minn.

Gene Foster, president, and David Volke, VP of consumer products, decided it was time to bring a female into the consumer side of the company. Ads at that time in the Minneapolis Star and Tribune were still listed: help wanted, female, or male. I was in the middle of a divorce with two sons, and this ad sounded interesting. Long story short, after three interviews I was hired as their first outside female sales representative. For most of the factories we represented, I was the first woman in their outside sales force. I had been there three days when they took me to Chicago where we attended a sales meeting at Shure Brothers. Roger Ponto, who was a national sales manager for Shure at that time, told me later he was aware he now had a female rep in the audience. I, on the other hand, didn’t understand much of what he had to say. Of course, this exchange didn’t happen until several years later.

I was not at Mel Foster very long when I knew I had been hired into one of the pioneer companies in the industry. I quickly began to learn about the ERA. At this point I must stop and say, I believe I “cut my teeth,” so to speak, in one of the finest representative companies in the country. From day one, I was treated with respect along with help from all of the employees. Never was I talked down to or treated differently than any of the male employees. Everyone there extended a helping hand and made it possible for me to grow beyond anything I ever thought possible.

In 1980, I moved to Seattle where I was going to learn how to play golf and plant flowers. That only lasted a few months. Ultimately, Roger and I decided to try merging our two families while starting Roger Ponto Associates.

So much for golf and flowers…

With Roger’s son Scott, Roger and me, Roger Ponto Associates was launched. Both Roger and Scott were known in the territory, so I looked beyond the lower 48 to find a place that I could carve out for myself. My first trip to Alaska was for 10 days. I fell asleep on the return flight while waiting for takeoff and were well underway when I came to. How many ways can you say EXHAUSTED? After that one trip, Alaska became my territory.

From 1980 until 1985, when Roger and I were married, I finally attended the ERA conference as a spouse. There, I came to know many women, most rep principals’ wives who were the strong, silent rod behind their men. In 1985, I began to attend the conferences as a sales representative and quickly learned the importance of the ERA function. By that time, more women were starting to be seen in the industry, some even as rep principals. Strong women who began to take their place in this once “male-only” industry became important leaders. As our rep firm grew I spent more time in the office giving up my much-loved dealers and territory of Alaska to Roger’s son Gary.

Gene Foster and the electronics industry came into my life when I needed it the most. I will be forever thankful to him and David for taking a chance on me.

I jokingly would tell people I had a non-sexual affair with 10 guys for the years I was working there. Because of them, I became the strong, independent woman I am today. Thank goodness that was something my husband and business partner, Roger, can live with and not feel threatened.