ARIZONA
In December, the Arizona Chapter hosted a high visibility networking luncheon, in partnership with Benchmark/Lark in Scottsdale, Ariz. Approximately 40 people from the electronics community attended the event, which featured Fred Grabau, national sales technology manager, who presented on the dynamic of Benchmark/Lark’s engineering development and services business segment. Benchmark recently relocated its headquarters to Phoenix, and also is planning to bring its ODM engineering services business into the Phoenix area, making it one of the go to technology resource for leading edge technology design and development in the area of RF and communications.

National Delegate Bruce Scoggin, CPMR, of Electro-Rep Associates was elected to a three-year term and will remain in the position until December 2021.

Exiting the board after many years of dedicated service are Bob Ball and Bob Kirkland, both of Aurora Technical Sales.

CERA also is gearing up for the always popular DTAM chapter meeting scheduled for March 2020 when they review their markets 2019 numbers.

Newly elected chapter directors for the terms of three years (2020 through 2022) include: Kingsland Coombs, CPMR, CSP, of Control Sales and Patrick Pajor of Abbey Sales Corporation.

The following chapter delegates were last elected in 2019 to two-year terms, so their tenures extend through 2020:

Chapter Director Bob Evans, CPMR, of EK Micro was last elected in 2019 to a three-year term, so his tenure extends through 2021.

The following chapter directors were last elected in 2018 to three-year terms, so their tenures extend through 2020:

Martin Linke of Dytec-NCI is leaving the board after many years of service. The Chicagoland-Wisconsin ERA board is grateful for his support and dedication to the chapter.

EMPIRE STATE
Empire State ERA hosted its annual holiday party in December at the Sherwood Inn in downtown Skaneatelles Falls, N.Y. The event offered a great opportunity for reps and distributors from the local area to meet and celebrate the holiday season.

METRO NEW YORK
In November, the Metro New York Chapter accepted an invitation to sponsor the inaugural kickoff meeting for the Long Island Chapter of Women in Electronics. Representing the chapter were Steve Alford, John Beaver and Jeff Bergstein from the local board. Near the end of their meeting, the chapter was given the opportunity to provide a brief introduction of ERA’s history and the Metro New York’s role in supporting the local market.

NEW ENGLAND
The last quarter of 2019 was a very busy one for the New England Chapter and 2020 is also shaping up to be chock full of chapter member events. 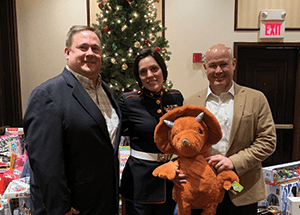 The chapter held a networking event in November, which provided members the opportunity to practice their golf swings on the simulator at Wamesit Lanes, while catching up with fellow rep, distributor and manufacturer members.

In December, the chapter supported the Molex Toys for Tots Industry Holiday Gathering that was very well attended.

Also in December, the chapter board met to plan 2020 and is preparing the send save the dates event notifications for March 25, July 20, and Oct. 14. New England ERA is especially excited for its upcoming July 20 event, when the chapter is planning a members golf outing.

SOUTHERN CALIFORNIA
In November, Southern California ERA hosted a fun and successful charity golf tournament, with dinner, silent auction and raffle. The chapter raised $5,000 for Operation Homefront, a nonprofit organization that focuses its efforts on relief, resiliency and recurring support for military and veteran families. Everyone had a wonderful time.