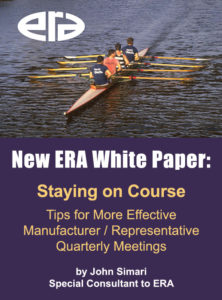 Gerald M. Newman and Adam J. Glazer are partners in the law firm of Schoenberg Finkel Beederman Bell & Glazer LLC, and they serve as general counsel to ERA. They are also regular contributors to The Representor, and participate in Expert Access, the program that offers telephone consultations to ERA members.

You can call Gerry Newman or Adam Glazer at 312-648-2300 or send email to them at gerald.newman@sfbbg.com or adam.glazer@sfbbg.com.

In the course of selecting noteworthy judicial decisions involving independent reps to feature in this column, some stand out as significant rep wins with legal principles worth sharing, some comprise notable losses from which lessons can be learned, and some, like the subject of this article, involve haphazard judicial rulings that can devolve into a hot mess.

Viewing Catalina’s conduct as violative of the parties’ contract and of the Minnesota sales rep statute, GGR complied with the SRA mediation provision by attempting to resolve its dispute on an informal basis before a California mediator. When this failed, GGR demanded arbitration under the Minnesota statute, which arms every sales rep with the right to arbitrate contract disputes with their principals.

In response, Catalina claimed the Minnesota statute was inapplicable because a provision in the SRA called for Nevada law to govern. Nevada is one of only a few states with no sales rep statute at all, and therefore, it asserted GGR had no right to arbitrate.

Scoring an early win that would later prove dispositive, Catalina successfully convinced the Minnesota court to transfer GGR’s suit demanding arbitration to the Las Vegas federal court. Once the two cases were consolidated in Las Vegas, and notwithstanding the fact that both parties had sought to obtain a federal forum, Catalina then moved to remand the litigation back to the Nevada state court.

To no surprise, GGR opposed, arguing that another transfer was inefficient and would only further delay the proceedings. It also raised the hypocrisy of seeking to litigate in federal court back in Minnesota, while asking to return to state court in Nevada. In a decision issued in March 2021, the Nevada federal judge ruled that his court was “a more appropriate forum than one of the states whose interest may be at stake,” and rejected Catalina’s motion to remand. No legal basis was offered.

The judge then turned to GGR’s motion to compel arbitration, to which it was entitled under the Minnesota rep statute, but unavailable if he decided the SRA was governed by Nevada law. Significantly, Minnesota’s powerful rep statute, which vests sales reps with the right to arbitrate, applies to any rep who is a Minnesota resident, whose principal office is located in Minnesota, or whose sales territory includes part or all of Minnesota.

Like many other state statutes, Minnesota’s seemed to anticipate conflicts with other states’ laws by including explicit language intended to protect its sales reps in wherever jurisdiction they may find themselves:

“(a) No manufacturer … shall circumvent compliance with this section by including in a sales representative agreement a term or provision, whether express or implied, that included or purports to include: (1) an application or choice of law of any other state; or (2) a waiver of any provision of this section.

(b) Any term or provision described in paragraph (a) is void and unenforceable.”

Notwithstanding the state legislature’s unambiguous directive to protect Minnesota reps by rendering contract provisions seeking to circumvent its statutory terms by applying other states’ laws void and unenforceable, the Nevada judge enabled just such circumvention.

He stated that Minnesota, home state of GGR and a key part of its sales territory, lacked “a focused relationship with the transaction.” Meanwhile, he found that Nevada, home state of Catalina and the location where its products were manufactured and distributed, had a substantial enough relationship to the parties’ transaction to override the Minnesota statue.

Curiously, none of the examples he cited in making this finding evidenced any interest, much less a substantial one, in the law of Nevada.

He noted that GGR’s sales territory included several states other than Minnesota but failed to mention that none of those states was Nevada. The judge also cited as an example that the negotiation of the SRA took place in California and Minnesota. Though no part of the SRA was negotiated in Nevada, this factor somehow still favored applying its law.

Held up to the light of day, however, those “interests” prove far less than “compelling.”

Citing no legal precedents or other authority for its decision, the court ruled that the contract provision calling for Nevada law “negated” Minnesota’s interest in enforcing its rep statute. However, the presence of such a competing provision is necessary for any choice of law analysis to be undertaken in the first place. It, therefore, cannot be determinative.

But that’s only the starting point. When no relevant factor suggested Nevada’s interest in seeing its law applied rivaled Minnesota’s, the court instead turned to Nevada “public policy about the arbitration of disputes between parties” and a state statute addressed to arbitration clauses.

First, virtually every state has expressed public policy favoring private arbitrations to lighten the load of its courts, including Minnesota, and there is nothing exceptional or unusual about Nevada’s interest.

Second, as GGR pointed out, the Nevada Supreme Court recently ruled that the same Nevada state statute was preempted by a federal arbitration statute, severely undercutting any policy interest derived from it.

Third, issuing a lengthy decision on outcome-determinative issues without citing to or relying upon opinions from higher courts or any other authority is not normal. Trial courts ordinarily cite to precedential decisions from appellate courts to show that their rulings are consistent with well-developed law, and they are not proceeding from a blank slate. Not so here.

Without more, the state of Minnesota’s interest in enforcing its sales rep statute certainly should not get “negated” by a contract provision. Yet, territorial judges who fail to fully consider the factual record or cite to precedent frequently deliver messy decisions. And as the 34-year old author and philosopher Criss Jami said, “It’s easy to make a mess when you’re not the one who has to clean it up.”