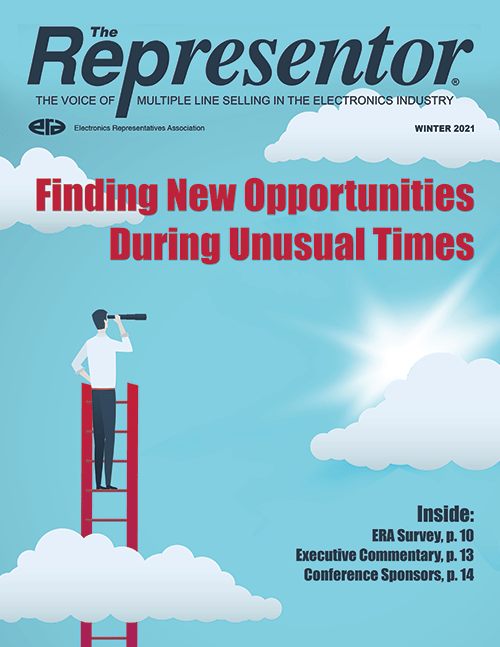 CAROLINAS
At the end of 2020, Carolinas ERA hosted a virtual networking lunch that was attended by almost 20 distributors and representatives from the region. Hosted by Wireless Research Center of Youngsville, North Carolina, the team provided data showing the current 5G rollout in the U.S., with roadmaps for future expansion and technology roadmaps. The Wireless Research Center offers memberships via sponsorship and is very well utilized throughout the southeast engineering community. They host virtual lunch-and-learns for manufacturers through rep and distributor members. These events are well attended in the designing community.

EMPIRE STATE
Empire State ERA is planning a rep-distributor event to be held virtually on Feb. 25. Chapter members are advised to save the date and be on the lookout for registration details coming soon.

FLORIDA-SUNSHINE
Florida Sunshine ERA held its annual Christmas Toys for Tots Space Coast Golf Tournament in Melbourne, Florida, in December. There were 72 industry partners in attendance and the chapter raised approximately $1,000 worth of toys for the cause. The chapter and ERA National sponsored three of the tournament holes.

INDIANA/KENTUCKY
In November, the Indiana/Kentucky Chapter members attended a lunch and tour of DIVaero located in Indianapolis. The event was attended by 15 members and was hosted by Tammie Fish, Stan Bentley and Nick Mates. Masked up and socially distancing, the attendees walked through a hidden gem of Indiana for military and aerospace assembly and beyond. DIVaero plans to have CMMC Level 3 certification in 2021, the new cybersecurity compliance stipulation for Department of Defense (DoD) contractors.

METRO NEW YORK
In December, Metro New York ERA held its first virtual event featuring Stephen Turner of Turner Communications. Turner provided an excellent tech tip session for Microsoft Office/Teams and other similar office suites. More than 50 people attended the session. The presentation was received very well. The event was free to members; non-rep member could attend for a fee. Based on the success of this event, the chapter plans to follow-up with several additional similar events.

MINNESOTA
The Minnesota Chapter is continuing its series of virtual breakfasts. The first 2021 event kicked off with Sam Richter, founder and CEO of SBR Worldwide/Know More, and leading speaker on sales intelligence who presented “Web Search Secrets to Find the Right Leads, at the Right Time, With the Right Message.”

SOUTHERN CALIFORNIA
Southern California ERA continues to host virtual monthly educational meetings. In 2020, the chapter held seven virtual meetings. In the last quarter of 2020, the chapter hosted virtual seminars on “Getting Paid for the Functions You Perform” and “Succession Planning” presented by attorney Andrew Bell of SFBBG. The chapter finished the year with an Owners Forum on the current state of the manufacturers’ representatives profession on the West Coast.

Planning for 2021 events is underway. The board has scheduled virtual monthly meetings focusing on legal and contract education, hands-on LinkedIn marketing, panel discussions with engineers and purchasing, a presentation on the health of the local economy, and discussions of distribution in this new reality. The chapter also plans to host a virtual trade show, hopes to hold its charity golf tournament in November and will investigate in-person meetings when it is safe to do so.