On Aug. 31, the Arizona Chapter hosted a networking program titled, “Best Practices between the Representative and the Distributor.” The chapter also held an In-Plant Show at the Medtronics facility on July 20. 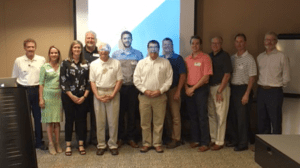 Carolinas ERA members gathered on Sept. 19 for a program with Debbie Castrodale, a certified business and sales coach/consultant. The session was titled “Learn How to Challenge the Status Quo in Sales.”

The Carolinas Chapter is continuing its monthly networking breakfasts throughout the fall. The chapter also held a September program titled “Learn How to Challenge the Status Quo in Sales.” The presenter was Debbie Castrodale, a certified business and sales coach/consultant and noted public speaker.

Carolinas ERA also held its 14th annual golf tournament on Oct. 16, benefiting the scholarship fund. Contributions were made to the American Diabetes Association in memory of Dick Paden. For many years, Paden planned events and raised funds for CERA’s scholarship.

On Aug. 2, the chapter held a networking event at Guaranteed Rate Field to see the Chicago White Sox vs. Toronto Blue Jays. Seventy-four people attended the event.
The chapter also hosted a succession planning program in Kenosha, Wis., on Sept. 22. John L. Vrablic of T.I.P.S. 4 Reps was the guest speaker at the event.

Chicagoland-Wisconsin ERA is very proud that board member Rick LaPiana is serving as the 2018 ERA National Conference Committee Chair.

In an effort to grow chapter activity, Dixie ERA held a networking event on Sept. 25. ERA CEO Walter E. Tobin was the guest speaker. The informative session provided attendees the opportunity to discuss current chapter initiatives in Huntsville, Ala., Atlanta and surrounding areas.

The Empire State Chapter held its annual golf tournament on Aug. 7 at Ravenwood Golf Club in Victor, N.Y. With more than 70 golfers participating, the chapter was able to present a $1,000 scholarship to a college freshman dependent of a rep member and raised $750 in donations for Coaches v. Cancer.

The tournament remains a signature chapter event and has been held annually for more than 10 years. Special thanks to the tournament volunteers and committee for organizing and running a great event.

The Mid-Lantic Chapter held a breakfast meeting on Sept. 12. ERA CEO Walter E. Tobin and John Beaver, president of GSA Tech, delivered a brief update on the value of ERA National and its current activities, and helped identify and address chapter member needs.

The chapter held its 2nd Annual Metro New York Charity Golf outing over the summer, which raised money for Long Island Cares to benefit disabled veterans. The chapter also plans to hold a follow-up dinner and board meeting.

Robert Foertsch of Win-Cor Electronics Sales, the chapter’s newest board member and an Advanced Life Support Provider (AEMT) with www.centereachfd.org, encouraged board members to donate blood at the Centereach Fire Department’s Semi-Annual Blood Drive. As a result, the chapter board made three much-needed blood donations.

On Nov. 9, the Northern California Chapter of ERA will host the first-ever Electronics Industry Night Out. Designed for reps, distributors, manufacturers, customers and peers, this social event will offer hors d’oeuvres, cocktails, dancing, entertainment and networking opportunities. The much-anticipated event is expected to attract 150 guests, including some local dignitaries and corporate VIPs. The chapter will donate 25 percent of ticket sale proceeds to local charities. For more information about this event, or to purchase tickets, contact Antoinette at events@ncalera.org.

The Pacific Northwest Chapter held a networking event on Oct. 2, in Seattle. ERA CEO Walter E. Tobin was the event guest speaker and provided an update from ERA National.

On Aug. 10, the chapter held its 14th Annual ERA Summer Social at the Sagebrush Cantina in Calabasas, Calif. Distributors, reps, OEMs and customers enjoyed the networking event. In addition, Bobbi Scobie attended as the Southern California chapter director. This was her first ERA event in her new position.

Southwest ERA will hold its next event on Nov. 3 over lunch at Cover 3 in Austin, Texas. The chapter will continue to hold breakfast meetings every six to eight weeks in Dallas for members and anyone who would like to meet with the chapter to learn more. If you would like to attend an upcoming breakfast meeting, contact Tobi Cornell, chapter secretary, at tcornell@kruvand.com.

The Spirit of St. Louis Chapter will hold a meeting on Nov. 6. A holiday party date is going to be announced soon as well.