Home → Current Posts → > How do you manage as a team in today’s environment vs. ‘back in the day’ prevailing individual wisdom?

> How do you manage as a team in today’s environment vs. ‘back in the day’ prevailing individual wisdom? 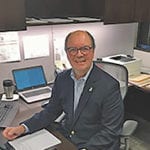 Greg Pace is president of Ohmite Manufacturing Company, ARCOL Resistor Company, Ohmite Ceramics Resistor Division, and just wrapped up a two-year assignment as president of Davies Molding Company, all subsidiaries of The Heico Companies LLC of Chicago. Greg has worked previously in the banking and investment banking industries focused on financial turnarounds, buyouts and equity financing. He has an Economics Degree from the University of Illinois, Urbana, Ill., and an MBA, Masters of Management from the Kellogg Graduate School of Management/Northwestern, Evanston, Ill. He presently serves on the board of directors for EDS.

You can reach Greg Pace at gpace@ohmite.com.

In early 2012, I was fortunate to be named president of Ohmite Manufacturing Company and I thought I “knew it all.” Within three weeks, I received a call from my father, Dr. John P. Paisios, Ph.D., a world class retired management consultant. During his career spanning from the 1950s through 2000, he placed numerous CEOs into their roles in the Fortune 500 and was often called in to help management figure out a better way to make great choices and fix prior mistakes while focusing on the organization. He was one of the original “Personnel Men” (think of the TV show Mad Men and you have the background here) from the 1950s to the early 2000s, now known as HR Folks.

So, dad calls me and asks, “Hey hotshot, where are your issues and problems?” I answered with the usual MBA stuff like, “Well dad, I have an acquisition going, sales need to grow and our on-time delivery needs to improve.”

“Maybe I should ask the question again,” he says. “Where are your issues and problems?”

We go on to discuss each of my team leaders, each manager and their roles and where I need help leading and managing and making decisions. Yep, they didn’t teach me at MBA school about human nature and decisions and all, we focused on spreadsheets and multiples and the like, and never decision making as it relates to your people.

I have learned a lot since then and was lucky to include my dad as a real qualified mentor. He helped change my way of thinking about issues and leadership, and continues to do so from his extensive files!

So, when ERA asked me to write an article for the Winter issue of The Representor, I looked at the theme of the upcoming ERA Conference, “Celebrate the Past, Embrace Tomorrow.” I headed to the garage where I keep boxes of my dad’s articles and I found one, no kidding, where he addressed “The Association of Electronic Manufacturers,” circa 1971 or so, titled, “How to cope in tough or uncertain times,” and published in the Chicago Sun-Times.

With the market uncertainties, Brexit, tariffs and our own market swings within our industry, I felt I had my article theme: “How do you manage as a team in today’s environment versus ‘back in the day’ prevailing individual wisdom?”

Dad actually has foundations and thoughts about teams, leadership and human feelings in his article. Below is a pretty good account of his wisdom from almost 50 years ago, with a few thoughts from myself on managing in our industry between the three entities of rep, distributor and manufacturer versus our outside environments.

In the course of his work as a management consultant, John Paisios (Pace), Ph.D., has identified a number of executive reaction patterns resulting from the pressures of this period of economic stagflation (a popular term from the 1970s).

“I personally envy the managers who can shrug off profit reversals by externalizing the causes of poor performance and attributing this marginal performance to ‘the economy.’ They suffer no qualms or guilt. They can marshal facts and indices, quote authorities and mouth the jargon of business and thus remain impervious to these pressures. They are authoritarian and without council.

“But the majority of the executives I know look to and within themselves. They harass themselves. They harass themselves with such questions as: ‘Where have I gone wrong? What should I have done that I didn’t do? What do my competitors know that I don’t? Didn’t I learn anything from all of my years in business?’” Dad continues, “A heavy sense of incompetence and inferiority sets in. Anxiety also sets in, accompanied at times with incongruous irrational behavior.

“The ultimate frustration behind the executives damaged self-confidence is the knowledge — the revelation — that his work environment is not totally under his control despite what the business books and manuals say about the preeminence of planning and logic.

“The prevailing business catechism says that all you need to solve your problems is a greater input of intelligence, work hard, professional expertise and raw enthusiasm. A sort of ‘I know what is best here approach.’ But is this true? A foreign sheik coughs, and energy costs go up, a gimlet-eyed bureaucrat exhausts the executives time through undecided directions of the government and develops endless red tape in events close to the industries heart. He can feel his managerial prerogatives slipping from his grasp; he realizes his time for creativity and innovation is vanishing. The executive’s initial reaction to these ego-damaging problems is denial, the assertion that nothing is wrong. But with the painful intrusion of reality, bewilderment sets in.”

Dad went on to say, “The executive then experiences depression, which is the bottoming out process. The psychological state soon gives way to anger over the situation. Finally, the (new way of thinking) executive accepts the new state of circumstances and determines to do something about it — to rebuild, and with a select team of achievers. Faced with this crisis, the majority of top executives discard the textbook rules of running a business. With survival as his motivation, the executive consolidates his power, often making changes in his management team. The manager no longer tolerates marginal performance. Once a split in management/leadership thinking and cohesiveness takes hold, it is difficult to stop here.

“Honest disagreement of course, is the life-blood of any organization (very futuristic!) and the fundamental building block of trust and teamwork. It should not be discouraged. What should be discouraged is disagreement based on nefarious purposes. Under stress and strains, human relations within the organization deteriorate and sensitivities become heightened. People overreact to real or imagined circumstances. In an environment of suspicion, rumors and bad attitudes can flourish.

“The lines of communication, both up and down (and across to one another in our industry, meaning rep/manufacturer/distributor), tend to freeze and even atrophy. One major reason is that management is uncertain of itself and cannot talk with finality about anything. In the milieu, the bootlegging of information and intrigue can multiply. In times of crisis, management can and does break the ‘psychological contract’ it has with employees and vendors [see above].

“The philosophical crux of the matter lies with management’s moral obligation to its employees, especially if the company has a humanistic doctrine of employee relations in the past. Each employee has an ‘employment contract’ with his company. This is the ‘ancient’ pact of employment. An employee exchanges his time, his energies and his skills for the right to be protected. He agrees to accept and put faith in the managerial wisdom. That is the philosophy of the matter. But the practicality is that most companies say nothing until the deed is done on cutbacks and layoffs. The employee is treated like a commodity up to the point of exodus. Secrecy is cited as necessary, so the outward flow of employees is controlled on the basis that management does not prematurely lose a particular skill until it is ready to do so.”

Learning from the past, embracing our tomorrows

So then we have learned from the past and need to embrace our tomorrows with the thought that should give solace to us: The corporation is an “immortal entity” and must not be permitted to die. Managements moral obligation to the remaining employees must not be forgotten, true today, true years ago. The retention of information is key here to drive relations to a stable platform. Managers and leaders must keep the faith in their company, its products and services and most of all in themselves. The exquisitely difficult decisions that involve people are by nature ragged, challenging and often unfair. Know your “MBA” material, but you need to drive the mediocrity from our organizations as humanely as we can, while focusing on the leaders of the organization, in good times and in tough times. The manager needs to stay flexible, expect the unexpected and focus on the selling cycle and the customer.

And in concluding from our “voice from the past,” we as an industry need to continue not settling for mediocrity in our organizations. Every chance we get we need to drive to next levels of product development, build partnerships of trust that last and grow our businesses together. The devil may be in the detail and we may have our own executive internal opinions, but the challenges as a leader can be better met by forming dependable teams around ourselves and building teams outside of our organizations between distributor, manufacturer and rep organization.

John Paisios authors from the 1970s about developing this theme, and it is as refreshing now as it must have been “back in the day.”