The Electronics Representatives Association (ERA) has announced that John O’Brien, CPMR, vice president of Coakley, Boyd & Abbett Inc. in Framingham, Mass., is the 14th recipient of the Ray Hall Spirit of ERA Award. 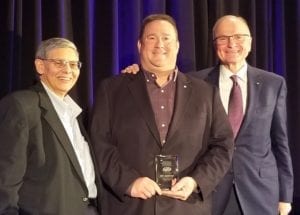 O’Brien was nominated for the award by Bob Evans, CPMR, of EK Micro and Senior Vice President/Industry for the ERA Board of Directors.

Evans said, “I am happy to nominate John O’Brien for the Ray Hall Spirit of ERA Award. John has contributed so much to ERA both on the chapter and national levels, including serving as the chair of the ERA Conference. He has always answered the call to action for the organization and the profession demonstrating his support of the rep function. His hard work and commitment to ERA make him a deserving recipient of the Ray Hall Spirit of ERA Award.”

When notified of the award, O’Brien said, “Receiving this honor is really a humbling experience. When I look back on the list of previous winners, I realized how blessed I am to be mentioned in the same category as so many that have done so much for our industry and ERA. I am proud to do my part to continue the good work started by Ray Hall and so many others before me.”

The Ray Hall Spirit of ERA Award was presented at the association’s Annual Conference on Feb. 25, 2020, at the AT&T Conference Center in Austin, Texas. As the award recipient, O’Brien received a full conference attendance and travel package.

About ERA
The 85-year-old Electronics Representatives Association (ERA) is the international trade organization for professional field sales companies in the global electronics industries, manufacturers who go to market through representative firms and global distributors. It is the mission of ERA to support the professional field sales function through programs and activities that educate, inform and advocate for manufacturers’ representatives, the principals they represent and the distributors who are reps’ partners in local territories. For more information about ERA, visit era.org.