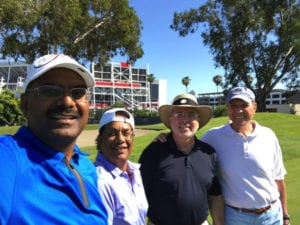 After a three-year hiatus, Northern California ERA hosted its Golf Classic event at the Santa Clara Golf and Tennis Club on June 21, 2017, in Santa Clara, Calif. The scramble-style tournament was well attended by reps, manufacturers, distributors and customers from all over Northern California. A dinner banquet and an award presentation were held following the tournament. Cash prizes were given for longest drives, closest to the pins and best team score.ERA CEO Walter Tobin was the guest of honor at the event. Tobin spoke to a diverse group of golfers and ERA members, emphasizing the importance of supporting and growing ERA on both the local and national levels.

“Events like this attract and retain partners in ERA. We all work hard to promote the electronics rep industry. We should continue to increase involvement with the younger generation to continue the importance of promoting independent reps,” Tobin said. He concluded by thanking Dave Gastel, president of the Northern California ERA, for hosting a very successful tournament.

Gastel extended his appreciation to Tobin and those who came out to support the event. He stated that Northern California ERA is one of the most active chapters, hosting various activities that encompass education, training and abundant networking opportunities. Pastel closed the evening by saying, “Let’s connect, collaborate and innovate.”

Northern California ERA will be hosting three events in the coming months: Bocce on Sept. 21; Owners’ Forum on Oct. 10; and the much-anticipated signature event, Electronics Industry Night Out, on Nov. 9, in which the mayors of San Jose, Santa Clara, Fremont and Livermore plan to attend.